Concerns have soared across markets, as the World Bank conveys in its June 2022 Report that the global stagflation risk is rising while a recession is inevitable for many countries.

Continue reading to understand what economists are worried about.

Highlights of this article:

What is Stagflation and its Causes?

Stagflation is a blended concept of “stagnation” and “inflation.” History teaches us that inflation and recession seldom co-exist. Inflation usually comes with a surge in consumer demands, which generally implies rising GDP while reducing unemployment.

However, in 2022 we seem to have all the elements for a “perfect storm”.

Amid the global economic slowdown during COVID-19, major central banks used the quantitative easing strategy to increase the money supply.

Whilst the damaged economy has not fully recovered in early 2022, the Russian invasion of Ukraine intensifies supply chain disruption causing food and energy prices to rise.

Wars have always been driving inflation up (nations get ready to fight) and increasing post-war consumer spending (as the population would be feeling safe and stimulating consumption nationwide).

Slower global growth due to Covid-19, sky-high commodity (energy) prices, geopolitical concerns, and the increasing inflationary pressure have only deepened the risk of stagflation.

An essential part of the economic recovery since the pandemic is the post-lockdown consumers’ demand.

Yet, such short-term desires could evaporate under the ever-changing economic situation and pessimistic expectations.

According to the University of Michigan’s monthly index, consumer sentiment hit a record low of 50.0 in June, with the highest uncertainty expressed over long-run inflation since 1991.

It is a tug-of-war between the consumer’s desire and the need to face the soaring prices.

Another survey by the Conference Board also reflects similar trends of falling optimism:

Current Market Situation vs Consumer Expectations, The Conference Board.

US Consumer Confidence Index, The Conference Board

Besides the consumers’ sentiment, surveys also show that 60% of the 750 C-suite executives expect a recession by 2023.

However, in the current scenario, businesses could use a mix of tech improvements and talent to achieve long-term growth:

Potential Effects and Solutions of Stagflation

A worrying combination of stagnant growth and long-term inflation haunts the global economy, just like in the 1970s. 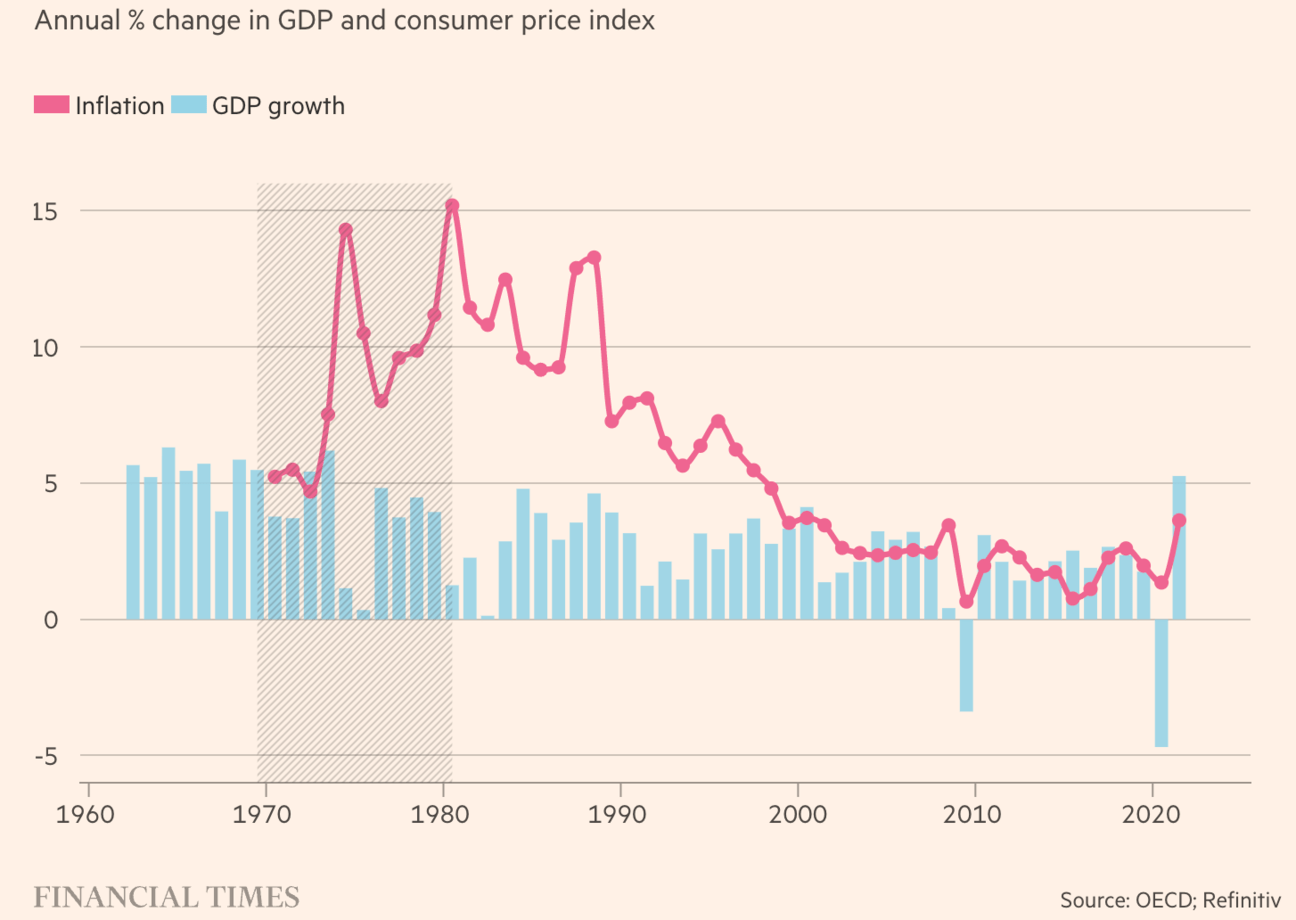 Furthermore, we now live in a well-connected world where the markets are interdependent.

In the 1970s, central banks implemented double-digit interest rates to eliminate high inflation rates. Will this happen in 202x as well? Stagflation is not a simple fix, and the situation is a toxic dilemma for policymakers:

A standard solution to contain inflation is increasing interest rates. Under stagflation, such policy could further dampen growth, aggravate unemployment, and morph into a recession period.

For this reason, stagflation is challenging to eradicate once it starts.

It is no surprise that the global supply chain is under severe threat, and SMEs everywhere are forced to tighten their belts.

SME manufacturers thus have an increasing need for liquidity to streamline operations.

Brought to you by Velotrade, a marketplace for corporates to access financing.

So, is stagflation happening now in 2022? It can’t be denied nor confirmed at this stage.

High inflation? Yes – it is happening.

For 2023-24, the trend of global economic slowdown is expected to continue due to the reasons below:

The level of per capita income in developing economies will suffer the most – almost 5% below the trend before the pandemic.

How about a recession? A country to be officially in recession, the GDP has to be negative for two consecutive quarters.

Next, let’s dig into one of the significant triggers of stagflation risk – the Russian-Ukraine War and the imposed economic impacts:

The Risk of Deglobalisation

The escalating Russia-Ukraine war and sanctions imposed by a group of western countries have taken a toll on the global supply chain. With nearly 300,000 companies in the US and Europe having suppliers in Russia and Ukraine, the economies are highly interconnected. The shipping industry –and logistics at large- has faced a massive hit.

Many western nations have closed their airspace to Russian aircraft. Tit-for-tat retaliation has resulted in similar restrictions by Russia. Manufactured goods normally air-freighted from Asia are now being re-routed with longer delivery schedules and even higher costs. The US-China trade deal has already put pressure on global trade, and this conflict adds to the pressure. The ambitious, trillion-dollar Belt-and-Road Initiative that recently started carrying large volumes of goods from Asia is also likely to lose traction, as Russia and Ukraine are vital links in the chain.

Global supply chains may witness a regional shift due to these disruptions and geopolitical conditions. As a result, many businesses may pull back from international markets and only operate closer to home in the future.

The war’s second big adverse impact is its inflationary pressure on commodity prices. The three major impacted sectors are the biggest Russia and Ukraine export sectors: energy, grain, and metals. Here’s how.

Russia is the largest exporter of oil, natural gas, and coal to the EU, comprising nearly 40% of its natural gas imports. Crude oil and natural gas prices have thus seen a dramatic rise. 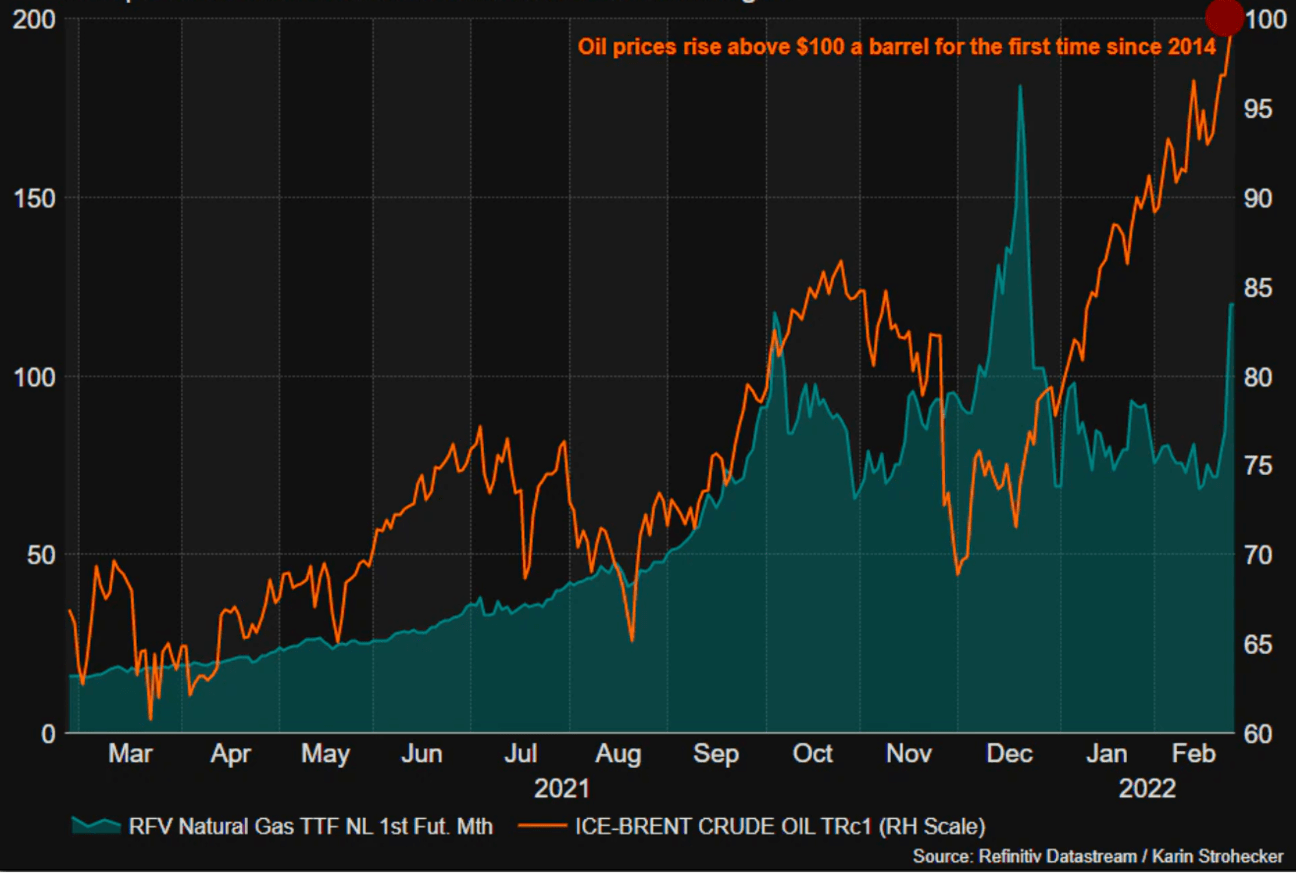 While some economies like the US, UK, and Canada have banned Russian oil imports, EU countries like Germany, Poland, and Hungary, are facing difficulties finding alternatives. Coal is another largely impacted energy commodity, with prices rising drastically since Russia’s invasion. 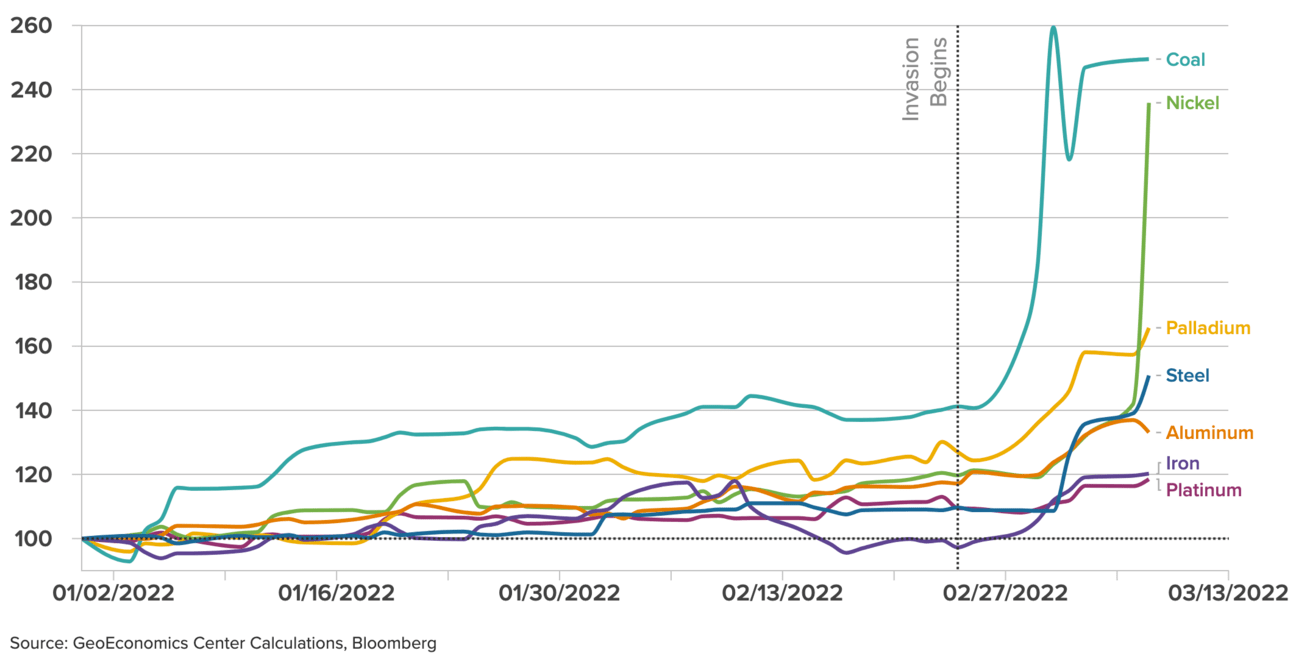 Although the global economy is shifting towards renewable resources, coal is still a prime fuel for electricity in many developing and emerging economies. Coal is primarily used in power stations in the Central and Eastern Europe. Though 70% of Europe’s thermal coal is imported from Russia, the EU (and Japan) have formally declared a ban on Russian coal imports.

While in Asia… China, India, Japan, and South Korea that heavily rely on Russian coal are now curbing their imports. The disrupted global coal supply chain is causing electricity prices to rise significantly. 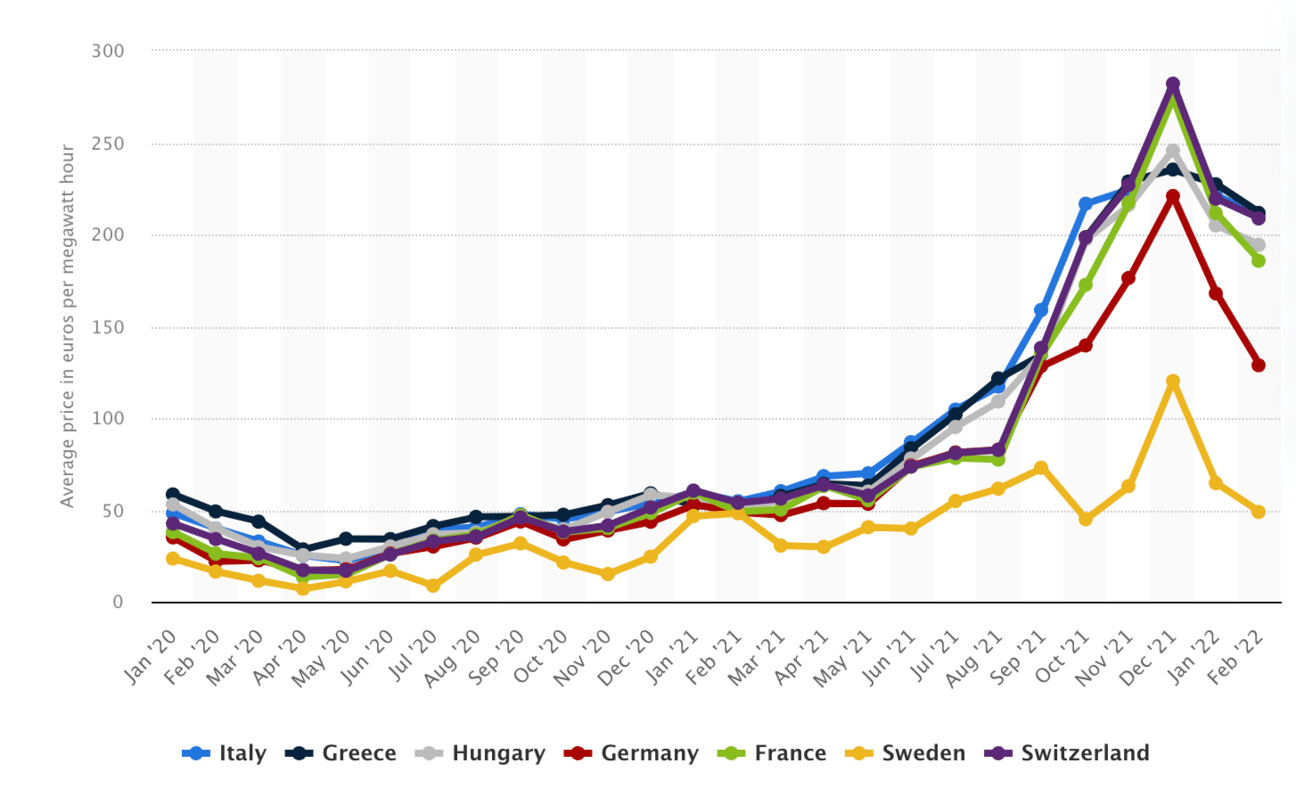 However, this spike in energy commodities is creating new market opportunities for some other economies.

Countries like Saudi Arabia, UAE, and Iraq hold a sizeable spare capacity to produce extra oil, which can compensate for lost supplies while increasing their demand from importers. Other major coal exporters like Australia and Indonesia are also profiting from these higher prices and shifts in demand.

The other significant effect is on global food supplies. Russia is the world’s largest and Ukraine the fifth largest wheat exporter. Nearly one-third of wheat export supplies come from the two countries. 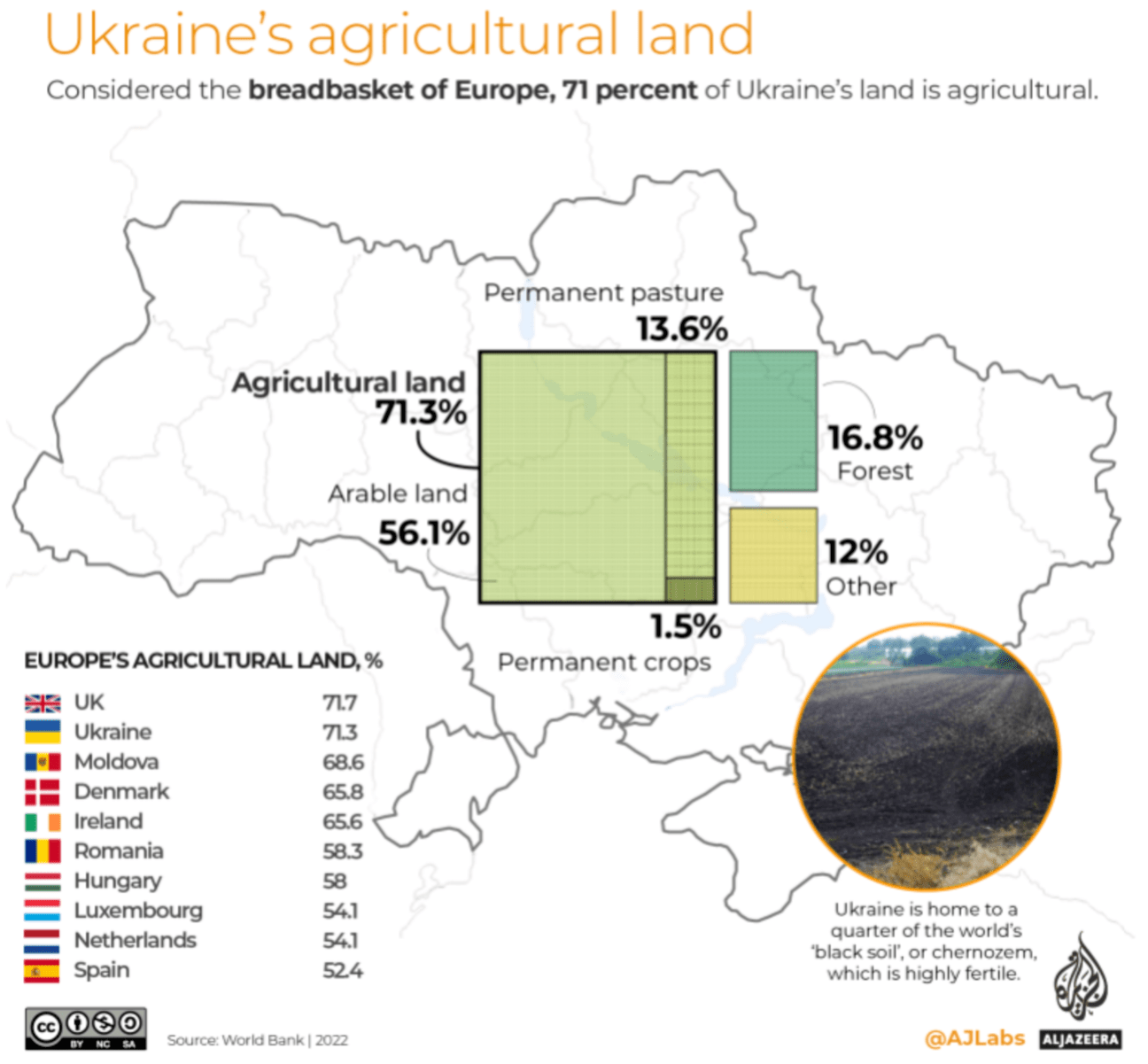 Consequently, wheat prices have hit their peak since 2008 crisis. 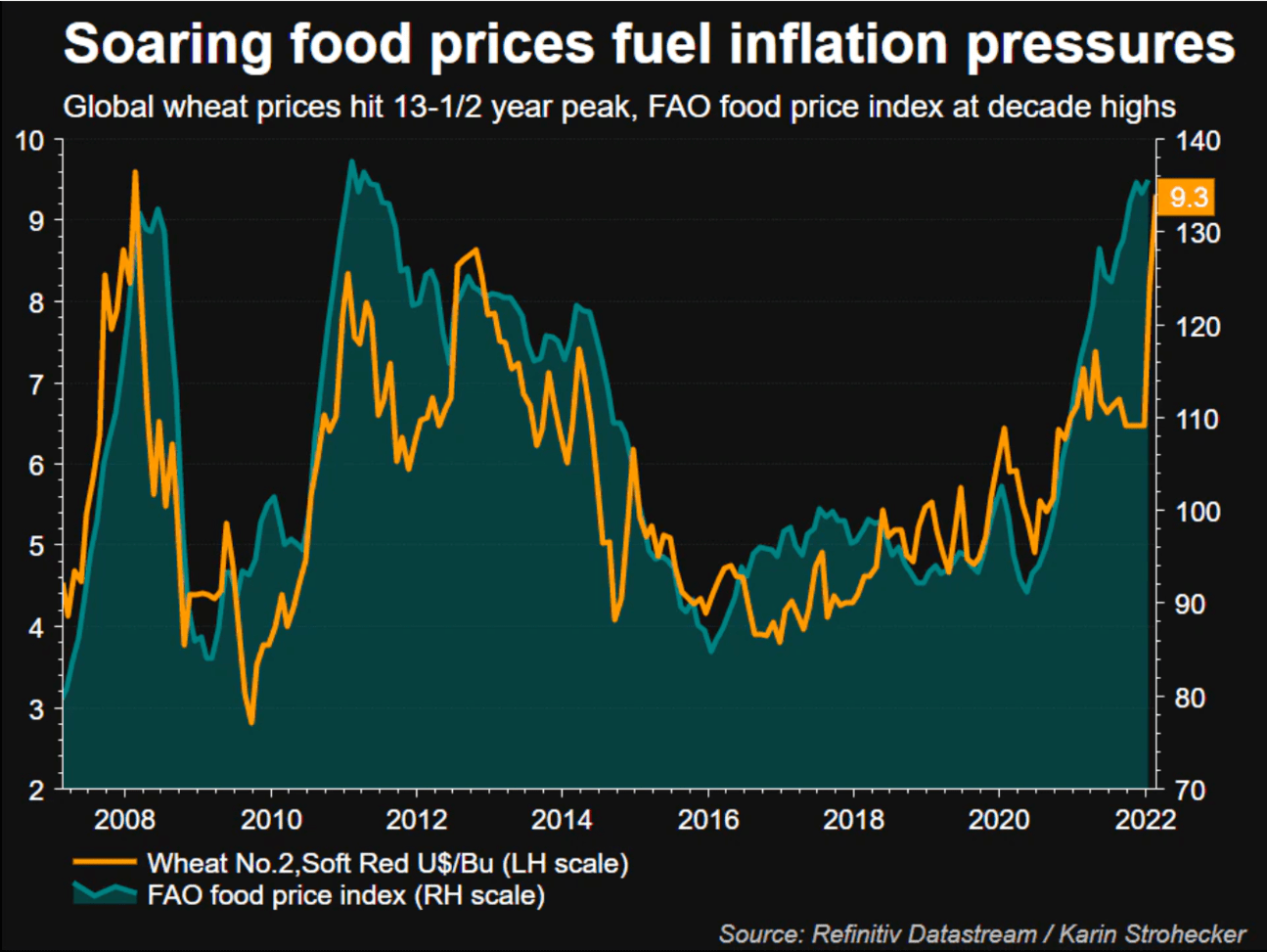 Most Ukrainian grain exported through the Black Sea is no longer operational since Russian warships began heading towards the sea.

This has disrupted a massive 20 million tons of wheat expected to be exported by July 2022, accounting for around 10% of global wheat exports. Ukraine’s agricultural production faces a shortage of labour, fertilisers, and farming equipment. The country is expected to experience a 25 – 50% decline in agricultural production for the upcoming season.

Since more than half of wheat is imported to developing nations across Africa, the Middle East, developing Europe, and Central Asia, there is a significant risk of food shortages among poorer countries across these regions.

Ukraine and Russia account for 7.5% of global iron and steel exports, and are also home to metals like nickel, aluminium, and palladium. Nickel and aluminium are used in batteries, microchips, and cars, while palladium is used to curb vehicle emissions. Shortage in nickel caused its price to rise by 35% in the quarter, halting the London Metal Exchange from trading in metal for several days in mid-March.

Neon is another rare metal central to the semiconductor industry experiencing a shortage. Around half of the world’s neon supply comes from Ukraine. The US utilises more than 90% of it in its chip industry.

The Impact on SMEs

While the size of SMEs allows them to be nimble and work around market problems, they are also vulnerable to sweeping changes.

The Russia-Ukraine conflict is having a dramatic impact on SMEs in several ways:

Key Russian banks have been excluded from the interbank messaging system, SWIFT, which restricts their access to 11,000 banks across 200 countries and territories.

However, payment cards issued by Russian banks would continue operations, as domestic payments in Russia do not rely on foreign systems.

Since trade credit insurance typically includes a war exclusion clause, there is growing uncertainty over its continuing availability.

Trade credit insurers have been pulling back from insuring goods or services for export to Ukraine and Russia due to the ongoing conflict of early 2022.

The difficulty in accessing trade credit insurance is expected to significantly impact SME importers delivering food, textile and electronics to both countries and those shipping products to the Ukrainian agriculture and Russian energy sectors.

Understand the significance of trade credit insurance (LINK TO Value of Trade Credit Insur) in performing global trade activities to realise the extent of this impact.

Lean inventories and just-in-time delivery schedules can no longer form the backbone of an efficient import-export business.

Meanwhile, tanker rates have seen pricing spikes ranging from 157% to 591%.

Pressures may temporarily be relieved, depending on the ever-changing trading environment.

What remains critical is having sufficient cash reserves and plans in place for potential crisis management.

Velotrade finances corporate’s operations swiftly and asks for no collaterals.